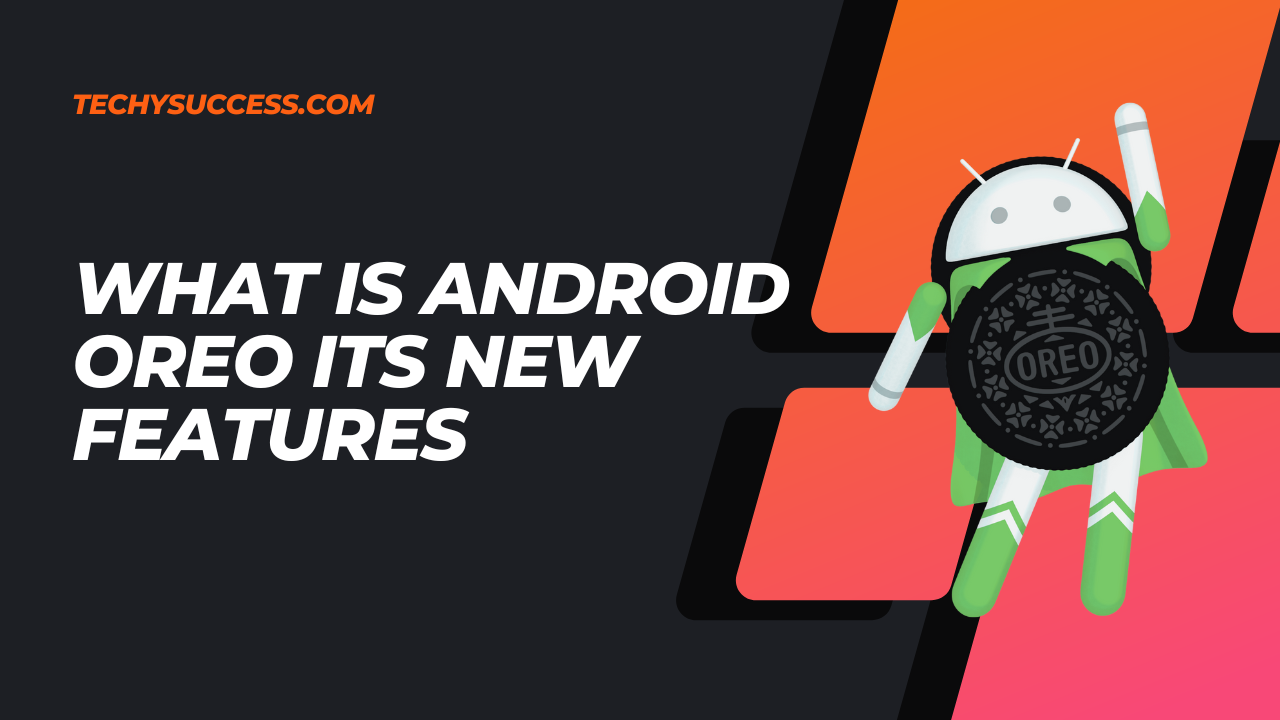 Android O or Oreo or Android 8.0 You can call it by any name. Do you know what is this Android Oreo? In the recent times, it is Google's best Mobile Operating System, which Google released on August 21, 2017.

Very soon you can find in your Android Phones. It is being said that this was the very expected Mobile Operating System of this year. This latest operating system has brought with it many new features and updates which people will like it very much.

Google has retained the tradition of nameing the operating system on sweet things this time too. This new mobile operating system is named Oreo. Google says that Android O is like a dessert. It is the world's favorite cookie.

Google claims that this new operating system will prove to be the smartest, fast and powerful ever. It has many best features like double bootup, adaptive icons, better audio quality.

So I thought why not give you complete information about what is Android Oreo so that you people also know about this new mobile operating system. So let's start without delay and know what is these Android Oreo Operating System and what are its new features.

Android Oreo will support in which smartphone

There is a lot of curiosity among people about whether this new operating system will be supported in their smartphones or not. So for your information, let me tell you that Android O will support only a few Smartphone.

Apart from this, this new operating system of Google can support in the new high-end smartphone of mobile company like Huawei, HTC, LG, Motorola, Sony.

Like the tradition of its naming, Google has also given the name of Android OS alphabetically in the order of Android OS in OREO. For your information, I have made a list of all those operating systems. First Android Alpha, Beta, Cupcake, Donut, Eclair, Froyo, Gingerbread, Honeycomb, Ice Cream Sandwich, Jelly Bean, Kitkat, Lollipop, Marshmallow, and Nogat and recently Release Recently.

Now I am going to give you information about the new features of Google Oreo, which you probably do not go. So let's know 10 such best features which Android O is currently giving in its new operating system.

Notification has always been a very strong and useful feature of Android. In the new version, the facility of customizable notification channels has been provided to the users, with the help of which they can get the facility of group alert in similar apps. In the form of example, if you have a lot of apps which are related to Travel, then at the same time you can interact and control them with the notification of all the apps at the same time with the help of their setting. You can easily snooze all those notifications of your need for this, for this you have been given the facility of time frame. You can also set the background and messaging style of snooze.

Like Android N, you can restrict the app activities running in background. The difference in it is that the apps only prioritize the Battery Life Extension without any user input. Android O automatically sets limit for background apps, which Services, Broadcasts and Location Updates will run in background. This means that those who run in the apps background have less effect on the battery life. It is the developer that makes such new methods come out which will ensure which apps should walk in the background and who do not.

There will hardly be anyone who will not like the feature with autofill. Almost all of us do not like to type the same information again and again. And from the service of Auto Fill, users will not have to fill the credit card and login information frequently, so that their time will also be saved and will not be related.

You must have already experienced the picture-in-structure video in iPad and other apps such as YouTube, but perhaps you have never seen this feature in Smartphone.

With the help of Android O, the size of the video can be shrinked which is being done currently in the floating video, one of the advantages is that users can work in Parallel in different apps at the same time. Android O provides the option to developers to set the Aspect Ratio and Custom Controls so that they can enable PIP mode to other apps.

Do you use Chromebook or Tablet, if yes, you would find a little ODD to use Smartphone and you must be wishing that some of its features were in the smartphone too.

Android O has adopted some such feature such as Superir Arrow and Tab Key Navigation when you are using physical keyboard. These features were requested ever since Chromebooks started supporting Android App, it got to know that Google Chromebooks is serial about the compatibility of Android App.

Andoid Oms mostly uses their own custom OS skins, so that both the appearance and shape of in-built and popular icons look like both the rest, which we download from Play Store. Some also scale with multiple screen size.

But the look of these most Android gets spoiled in big devices. Android O has updated something in this time from luck. He has used adaptive icons, which has made the visual look of Android O much better and using it in any big devices, there is no difference in its look which is a big success.

We also saw Improved Bluetooth Support which supports high-quality audio with the help of Sony LDAC. Along with this, the third-party calling apps also supports so that it can work among themselves with the help of your Network Operator's.

It may sound strange to hear, but Android O Multiple Display supports, so that the user can take an ongoing activity from one screen to another. This feature can be very useful in Chromebook because Chrome OS is slowly becoming more android friendly.

According to Android O, the storage space quota in all apps will remain for Cache Data, whenever the system has to free disk space to free, then it will delete the data from those apps which are consulting more data than allocated quota first.

This would help the users a lot, who could see the puzzle that their available storage size was slowly decreasing because Unnecessary Cached Data was taking that storage before.

According to Google, Android O profile owner and device owner provides better modes of management, which are more powerful, more secure than before. These enterprise features are more highlighting to use its ability managed profile in the corporate-ovned device and about enterprise management file-based encryption.

In all these features, you must have seen how Android O is following the footsteps of Nougat's to a great extent Is strengthening

With this, Goolge is adding some such features to its new operating systems that can develop Android properly in the stipulated time.
TechySuccess.com is Provide All Information About Blogging, Coding, Apps Review, Latest Technology and Much More.