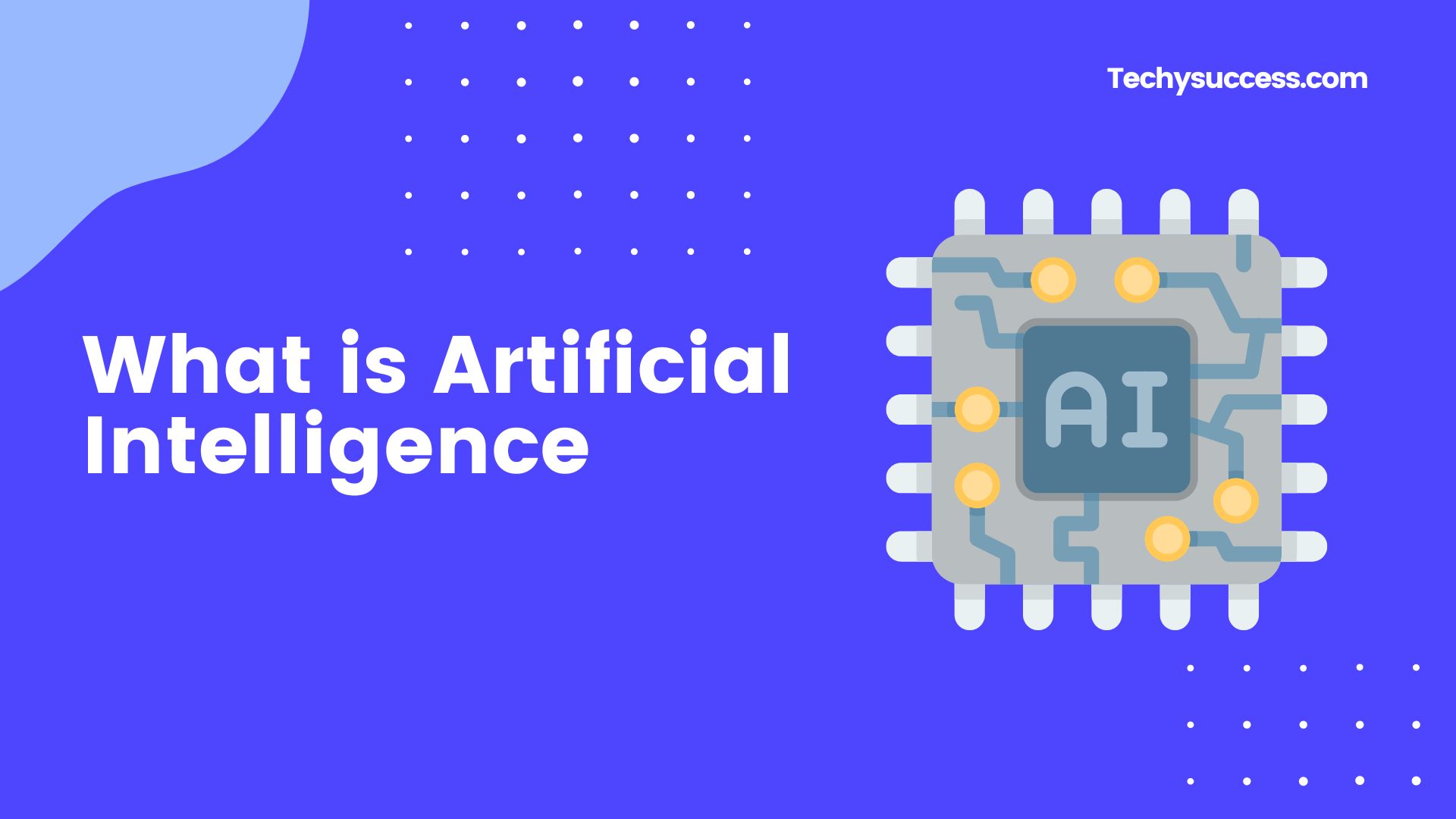 Do you know what is Artificial Intelligence or Artificial Intelligence (AI)? Ever since the invention of computers, humans have increased their use a lot. They use them to do all their work, due to which we have to depend more on them. This has led to the exponential growth of their dependency. Humans have increased the capability of these machines to a great extent such as their speed, their size, and their ability to work so that they can do our work in a very short time, which will save our time.

You might have also made it a goal to see that nowadays Artificial Intelligence is being praised only. If you do not have much information about it then you do not need to be worried because today I am going to give you complete information about what is Artificial Intelligence and why it is so important. So that by the end of this article you will get the answers to all the questions arising in your mind.

A new domain has now emerged, which people know by the name of Artificial Intelligence, which is basically a branch of Computer Science and whose main job is to make such intelligent machines that are as intelligent as humans and have their own ability to take decisions. This will make our work even more accessible. Then without delay, let's start and know what is this artificial intelligence and why it is so important for us humans.

What is artificial intelligence?

The full form of AI is Artificial Intelligence or in Hindi, it means artificial intelligence or artificial brain. This is such a simulation that machines are given human intelligence, or rather, their brains are so advanced that they can think and work like humans.

This is done especially in the computer system itself. There are mainly three processes involved in this process. They are first learning (in which information is put in the mind of machines and they are also taught some rules so that they follow those rules to complete a given task), second is Reasoning (under this, the machines are instructed to follow the rules made to move towards the results so that they can get an approximate or definite conclusion) and the third is Self-Correction.

If we talk about the particular application of AI, then it includes expert systems, speech recognition, and machine vision. AI or Artificial Intelligence is designed in such a way that it can think like humans, how the human brain first learns any problem, then processes it, decides what is right to do, and finally how to do it. While solving, thinks about it. In the same type of artificial intelligence, machines have also been given all the features of the human brain so that they can do better work.

John McCarthy first told the world about Artificial Intelligence. He was an American Computer Scientist, who first told about this technology at the Dartmouth Conference in 1956. Today it has become very big like a tree and everything from all robotics process automation to actual robotics comes under it. In the last few years, it has gained a lot of publicity as the technology of big data has also been included in it and due to its increased speed, size, and variety of data business, many companies want to adopt this technology.

If I talk about AI, then with the help of this it has become very easy to identify the pattern in raw data, whereas there are many mistakes by humans, due to this companies get more insight on their data in less time.

When man was discovering the real power of computer systems, then man's desire to know more forced him to think that "Can machines also think like us?" And in the same way, the development of Artificial Intelligence started, which had only one purpose, to build such an intelligent machine that is as intelligent as humans and can think like us.

Creating Expert Systems − Creating some such systems which can perform intelligent behavior, which can learn, demonstrate, explain, and advise its users with it.

Implementing Human Intelligence in Machines – Creating systems that can understand, think, learn, and behave like humans. What is Artificial Technique? If we talk about the real world, then there are some strange characteristics of knowledge such as

Its volume is very high, or rather unimaginable.

It is not completely well-organized or well-formatted.

Along with this, it keeps on changing continuously.

Now it comes to what is AI Technique then. So let me tell you that Artificial Technique is such a technique that we will keep knowledge or knowledge in such an organized way that we can use it very efficiently like –

It should be readable and understandable by the people who provide it.

It should be easily modifiable so that its errors can be easily rectified.

It should be useful in many places, although it is incomplete and inaccurate.

If AI techniques are equipped with complex programs, then its speed of execution can be increased to a great extent.

Artificial Intelligence can be divided into many types, but the most important of them are

This type of AI is also called narrow AI, these AI systems are designed in such a way that they do only one particular task. For example, it has a great example of Virtual Personal Assistants such as Apple's Siri weak AI.

The Turing Test was developed by mathematician Alan Turing in 1950, which was used to find out whether computers can also think like humans or not.

Arend Hintze, who is also an assistant professor of integrative biology and computer science and engineering at Michigan State University. He has categorized AI into four parts, which are as follows.

An example of this is Deep Blue, an IBM chess program that defeated Garry Kasparov in the 1990s. Deep Blue has been designed in such a way that it can identify the pieces of the chess board and make predictions accordingly.

But it does not have some memory of its own so that it cannot remember about its past move which it can use in future. It analyzes the possible moves – it's own and it's opponent's – and then chooses the best strategic move accordingly.

Deep Blue and Google's AlphaGO are designed for narrower purposes and cannot be easily applied in other situations.

These types of AI systems use their past experiences to decide their future decisions. Some decision-making functions that are used in autonomous vehicles have been designed in this manner.

By using similar observations, future accidents can be prevented to some extent, such as changing the car to another lane. These observations are not permanently stored.

This is a psychology term. This is a hypothetical concept. In this, it shows that others have their own beliefs, desires, and intentions which have an impact on their decisions.

This type of AI is not present in this world yet.

Machines that have self-awareness understand their current state and by using the same information they understand what others feel. This type of AI is not present in this world yet.

Automation is a process by which system and process functions are automated. Robotic process automation, for example, is programmed so that they can easily perform high volume, repeatable tasks.

The difference between RPA and IT Automation is that in RPA, it adapts according to the circumstances, whereas it does not happen in IT Automation.

Machine Learning is a science in which computer works without programming. Deep Learning Machine is a part of Learning itself in which predictive analytics is automated.

The third is reinforcement learning, where data sets are not labeled but after taking some action and more action, feedback is given to the AI ​​system.

It is also compared to human eyes, but there is no limitation of machine vision and they can see even beyond the walls. That is why they are used a lot in medicine as well.

Natural language processing (NLP) is a process in which a human language is understood by a machine with the help of a computer program.

For example, you can take SPAM detection only, in which the program of the computer decides which text is the original email and which is the spam email. The main functions of NLP include text translation, sentiment analysis, and speech recognition.

Pattern recognition is a branch of machine learning that identifies patterns in data and is used later in data analysis.

Robotics is a field in which more focus is given in the design and manufacturing of Robots. We use robots for such tasks which are very difficult for us humans.

Because they do the most difficult tasks very easily and that too without any mistake. For example, we use them in the assembly line of Car Production.

The biggest use of AI is in the healthcare industry. The biggest challenge here is that how can we treat the patients better and that too in the least cost. That is why now companies are using AI in hospitals so that better and faster patients can be treated smoothly.

There is one such very famous healthcare technology and whose name is IBM Watson. Along with this, now health assistants have also come for common diseases, with the help of which common people can now get their diseases treated.

With the help of robotic process automation, highly repetitive tasks are now being done by machines. Machine learning algorithms are now being integrated with analytics and CRM platforms to know how companies can better help their customers.

Chatbots are being incorporated into websites so that service can be provided to the customers as soon as possible.

With the help of AI, financial institutions are getting a lot of benefits. Because companies had to invest a lot of money and time in data analysis earlier, but now it is not so, now AI does everything in a very short time. • AI in law. Earlier the processing of these documents was a very worrying task, but now with the help of AI, the processing of these documents is done very easily, due to which the work runs very efficiently.

AI is also widely used in the manufacturing industry. The work which used to take hundreds of people to do earlier, today with the help of a machine the same work is being done much faster and better.

Artificial Intelligence and our future

Due to this, knowingly or unknowingly, these machines are becoming even more powerful. And their thinking power is also gradually increasing so that they can mold themselves in any situation and this is not a good thing for us.

The day is not far when they don't even follow our orders and work as per their wish. In such a situation, human society may have to suffer a lot. They have already entrenched their roots in all our industries and we have become very used to them, due to which we are finding it difficult to do our work without them.

This may sound a bit strange to hear but it is 100% true. I believe that even if we use Artificial Intelligence for good in our life, but it is very important for us to keep in mind that we should keep the keys to some things which are above our control. So that when the time comes, we can use it properly.
TechySuccess.com is Provide All Information About Blogging, Coding, Apps Review, Latest Technology and Much More.